If the Hill Cantons were one of the paths that led me to discover the OSR, the other was certainly Lamentations of the One Page Dungeon Princess.

It was October 2011 and I was slowly recuperating from the great recession, a failed relationship, university, an abusive workplace, and other woes. The word vicissitudes comes to mind. At the time I was struggling to discover how to make my way as a designer-or-artist-or-something, while still far too embarrassed to actually take advantage of the internet whole-heartedly.

I found solace in a quaint and friendly little forum called the Cartographer’s Guild, where I drew maps and participated in little competitions, and occasionally scored some commissions. It’s a place full of talent.

That October, for one light challenge, I put on an album by Deep Purple and drew “Deep in the Purple Worm”—a dungeon inside a petrified purple worm—in the course of listening to that album.

I won the light challenge. 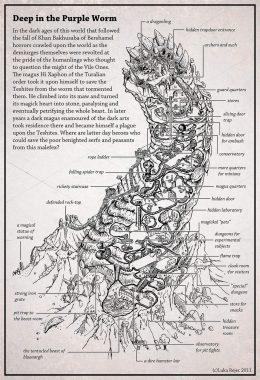 When the 2012 One Page Dungeon rolled round I somehow heard about it, I fixed up my dungeon, colored it and generally made it prettier, and submitted it. Then I moved to the Netherlands.

It won the prize for best art, and [one of?] the then organizers, Alex Schröder, contacted me that I needed to pick a prize. I spent three whole emails hemming and hawing and being too polite (flabbergasted and terrified) to say which one I wanted.

Eventually I buckled and confessed that I wanted the Lamentations of the Flame Princess Grindhouse Edition. Alex put me in touch with James Raggi, and James shipped me my lotfp books. And that’s how I discovered that there was an OSR.

Five years later, James trusted me enough to let me design Frostbitten and Mutilated. That was a ride, too. I’ll cover that story later—but you should go get the book now, because it’s cool.

This post is the second what may become a series of posts on the people and blogs and products of the OSR that impressed me in some way or other. I started with the previous post on the Hill Cantons. Let it be very clear that this writing has been inspired almost entirely by the announcement that Google+, the quirky social network that gave birth to so much creativity in the rpg scene over the last decade, is shutting down.

Since those days, Lamentations of the Flame Princess has remained profitable and is, in my estimation, currently the best publisher of innovative and useful rpg materials in Dungeons & Dragons.

The One Page Dungeon Contest continues to amaze and astound with submissions and incredibly useful and fun dungeons every year. I even submitted dungeons a couple more times.

The Cartographer’s Guild is still going strong and is worth a visit if you like fantasy maps.

If you like my art and writing, the best way to support me is to either commission something directly, or to become a member of my Stratometaship patreon where I write and illustrate metal-inspired rpg  adventures and settings.

2 replies on “Lamentations of the One Page Princess”

It is so cool you did the graphic design for Frostbitten and Mutilated! It is such a well laid out book and the combination of you and Zak Smith is an OSR dream team. I guess I should have read the credits better when I bought it.

Thank you Morgan! It is a pleasure to hear you liked it! ^_^